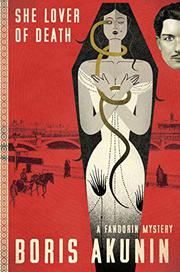 SHE LOVER OF DEATH

Akunin returns to 1900 Moscow, where a suicide club’s numbers threaten to diminish to the vanishing point unless evergreen investigator Erast Petrovich Fandorin (The Coronation, 2019, etc.) can put an end to its distressing trend.

Masha Mironova arrives in Moscow with a modest inheritance, a strong aversion to her native Irkutsk, and a starry-eyed determination to be reunited with Petya Lileiko, a carelessly attractive swain from the big city who’d wooed her as Harlequin during his visit to her hometown. What she finds is a little different from what she’d expected. At first the suitor who’d effortlessly pried her away from her designated fiance seems hardly to recall her; when he does, he whisks her off to a club hosting the Lovers of Death, where the cultish leader Blagovolsky, who’s dubbed himself Prospero, lords it over an ill-assorted gathering that includes Prospero’s assistant, Ophelia; noted poet Lorelei Rubinstein; seductive Kriton; medical dissector Horatio; accountant Caliban; twins Rosencrantz and Guildenstern; grammar school student Gdlevsky; Petya’s fellow university student Avaddon; and Petya himself, who’s known to the group as Cherubino. All of them share a consuming interest in suicide. Ophelia, a medium, calls on the spirits of the group’s late members to inform the group which among them has been nominated for self-slaughter. But soon after Masha, who adopts the sobriquet Columbine, is admitted to the Lovers of Death, Ophelia’s demise leaves the group casting about for an alternative way to decide which candidates should be moved to the head of the queue. Meantime, alarmed by the rash of suicides and suspecting that the club may be linked to anti-czarist terrorists, Lt. Col. Besikov arranges for Fandorin, operating under his own pseudonym, to infiltrate the group. The results, including the alter ego that conceals Fandorin, are creepily entertaining though never exactly mysterious in the ways you might expect.

Akunin continues to notch the most consistently varied approaches to the adventures of the Great Detective on record.

THE CORONATION
by Boris Akunin
Mystery

SISTER PELAGIA AND THE RED COCKEREL
by Boris Akunin
Fiction

SISTER PELAGIA AND THE WHITE BULLDOG
by Boris Akunin
Fiction

THE DEATH OF ACHILLES
by Boris Akunin
Newsletter sign-up