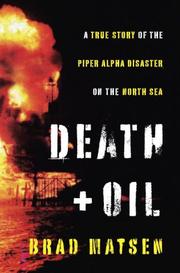 A detailed, up-close account of a 1988 oil-rig explosion in the North Sea off the coast pf Scotland coast that killed more than 150 men.

Matsen (Jacques Cousteau: The Sea King, 2009, etc.) began researching the Piper Alpha oil rig, operated by Occidental Petroleum Corporation, during 2008, two years before the Deepwater Horizon disaster. Naturally, last year’s tragedy makes the author's research especially relevant. Matsen’s thorough reporting is fueled by outrage, as he makes the case that our addiction to oil as an energy source almost guarantees further fatalities because exploration, capture, refining and transportation are inherently dangerous. The narrative opens with the depression of Piper Alpha survivor Bill Barron, who reappears throughout the text. Dozens of other crew members appear as well, creating a challenge for Matsen to keep the narrative under control. At appropriate junctures, the author breaks away from the occurrences on the massive oil rig to explore what North Sea drilling did to life in Scotland, with the heaviest impact on the coastal city of Aberdeen. After chronicling the horrific multistage explosions that consumed so many lives, the author on those manning nearby seaworthy vessels who tried to rescue the Piper Alpha crew. The aftermath of the disaster, including capping the drilling apparatus and extinguishing the fires, receives minute attention as well. The investigation by UK authorities did little to satisfy public outcry, and certainly did little to enhance oil-rig safety around the globe. There are plenty of villains in the narrative, though Matsen concentrates on Armand Hammer, who came to the oil industry during advanced middle age, aggressively built Occidental Petroleum from a tiny California-based company to a worldwide behemoth during the 1960s and ’70s and staked so much capital on the North Sea drilling that safety concerns did not receive adequate attention.

A searing indictment of human greed mixed with memorable sagas of death and survival.


NEW AND NOTABLE NONFICTION FOR OCTOBER:

ASSASSINS OF THE TURQUOISE PALACE
by Roya Hakakian
Nonfiction

THE BATTLE OF MIDWAY
by Craig L. Symonds
Nonfiction

IT CALLS YOU BACK
by Luis J. Rodriguez
Nonfiction

OIL ON THE BRAIN
by Lisa Margonelli
Nonfiction

THE ESKIMO AND THE OIL MAN
by Bob Reiss
Nonfiction

A SEA IN FLAMES
by Carl Safina
Nonfiction