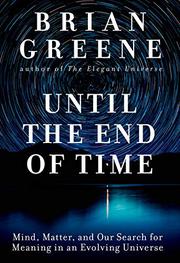 UNTIL THE END OF TIME

Mind, Matter, and Our Search for Meaning in an Evolving Universe
by Brian Greene
BUY NOW FROM
AMAZON
BARNES & NOBLE
LOCAL BOOKSELLER
GET WEEKLY BOOK RECOMMENDATIONS:

The author of several bestselling explorations of cutting-edge physics turns his attention to the cosmos, and readers will encounter his usual astute observations and analysis.

Greene (Physics and Mathematics/Columbia Univ.; The Hidden Reality: Parallel Universes and the Deep Laws of the Cosmos, 2016) quotes from philosopher Bertrand Russell who, in a 1948 radio debate with a cleric, based his agnosticism on a scientific law: “the universe has crawled by slow stages to a somewhat pitiful result on this earth and is going to crawl by still more pitiful stages to a condition of universal death…if this is to be taken as evidence of purpose, I can only say that the purpose is one that does not appeal to me.” Russell is referring to the second law of thermodynamics, which states that “everything in the universe has an overwhelming tendency to run down, to degrade, to wither.” Greene explains that this is entropy, a term that is often popularly defined as a gradual slide into disorder. In the Big Bang, a supremely ordered low entropy kernel of energy expanded into the familiar universe, but entropy’s steady increase will lead to a uniformly disordered cold, lifeless emptiness—although not for a long time. The law allows plenty of local, highly organized, low entropy areas—galaxies, stars, civilization—whose existence is more than balanced by wasted energy they produce. Having announced his theme, Greene regularly returns to it in 11 chapters that begin at the Big Bang and proceed with deeply learned, sharp, never dumbed-down accounts of what scientists know about star formation, planet formation, life’s origins, evolution, consciousness, language, culture, and religion. The author concludes his engaging survey with what the future might hold for humans (very long life) and the universe (even longer); beyond a certain entropy, however, there will be no room for us.

An insightful history of everything that simplifies its complex subject as much as possible but no further.