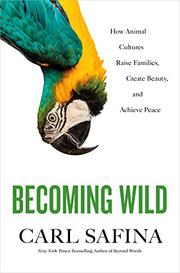 Humans possess culture, but so do animals according to this compelling account of three nonhuman societies: sperm whales, scarlet macaws, and chimpanzees.

Nature writer, activist, TV host, and founder of the Safina Center, the author notes that animals learn from their elders how to fit in, communicate, search for food, and identify friends and strangers. This is culture, and it’s not inherited. “An individual receives genes only from its parents,” writes the author, “but can receive culture from anyone and everyone in the social group…and because culture improves survival, culture can lead where genes must follow and adapt.” During the 1950s, Navy personnel listening for Russian submarines were astonished to hear elaborate, beautiful songs that turned out to come from whales. As a result of the bestselling recording, “whales went from being ingredients of margarine in the 1960s to spiritual icons of the 1970s emerging environmental movement.” Safina’s lovely account of his travels with researchers studying sperm whales reveals a majestic, closely knit community. Turning to scarlet macaws, every one of which knows its friends and avoids macaws that don’t belong, the author wonders what happens to a social organism after a few thousand generations. In traditional evolution, new species appear when isolation (due to a river, mountain range, etc.) allows the changes of Darwinian natural selection to spread throughout one group but not others. Don’t animal cultures produce a similar reproductive isolation? In fact, cultural selection, although controversial, may act as another engine of evolution. Our closest relatives, chimpanzees, share 98% of our genes as well as many cultural traits, especially a fractious social system in which macho males compete for leadership with more violence than seems reasonable. Most books on natural history include pleas for preservation of the wild, and Safina’s is no exception. Sadly, none of his subjects are thriving, and few readers will doubt that these magnificent creatures need urgent attention.

BEYOND WORDS
by Carl Safina
Nonfiction

A SEA IN FLAMES
by Carl Safina
Nonfiction

THE VIEW FROM LAZY POINT
by Carl Safina
Nonfiction

EYE OF THE ALBATROSS
by Carl Safina
Nonfiction

SONG FOR THE BLUE OCEAN
by Carl Safina
Newsletter sign-up