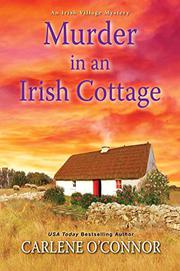 MURDER IN AN IRISH COTTAGE

A newly fledged Garda jeopardizes her romance in pursuit of a killer.

Siobhán O’Sullivan, who helps her siblings run the family cafe in Kilbane, is secretly engaged to fellow Garda Macdara Flannery. Siobhán is on holiday from her day job (Murder in an Irish Pub, 2019, etc.), so when Macdara’s cousin Jane calls with a frantic cry for help, Siobhán accompanies him to Ballysiogdun. Jane is legally blind and shares a cottage with her mother, Ellen, who’s estranged from her sister, Macdara’s mother. His mam is not easy to get along with, but Ellen, a bossy, retired schoolteacher, is even worse. They arrive to find a crowd of people near Ellen’s cottage, all agitating to have it bulldozed because they’re convinced that its location in the middle of a fairy path spells bad luck and because people who live in it keep dying. Just the night before there had been strange lights, screaming, and even a black dog, the final straw for a superstitious lot of local residents. Siobhán and Macdara find Ellen dead, poisoned or smothered or both, the body carefully posed and a window broken. Although the local Garda want no help from them, both are determined to investigate, especially since Jane is a suspect. Siobhán, who considers Macdara’s involvement tricky because he’s a relative, intends to follow every clue no matter where it leads. Luckily, the investigator is a friend from Garda college who’s willing to pass her information. Ellen was unpopular for so many reasons that there are plenty of suspects who may have wanted her dead: a local councilman, a professor writing a book on the fairy people, and several unhappy neighbors. Picking her way through a thorny thicket of alibis and lies, Siobhán uncovers hidden gold and hidden relationships. Can she also uncover a killer before the case ruins her romance?

Plenty of surprising twists and oodles of Irish charm make this an entertaining read.

MURDER IN AN IRISH PUB
by Carlene O'Connor
Mystery

MURDER IN AN IRISH CHURCHYARD
by Carlene O'Connor
Newsletter sign-up