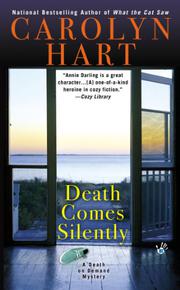 Did you hear the one about the mystery-bookstore owner menaced by an ax murderer?

Annie Darling, proprietor of Broward’s Rock’s detective bookshop Death on Demand, is due to volunteer at the island’s charity store, Better Tomorrow. But a book-signing by local author Emma Clyde forces her to swap times with Gretchen Burkholt, who rings up several times to gossip about a scandalous message she’s found in a jacket donated by the family of Everett Hathaway, who accidentally slipped out of a kayak and drowned on a midnight sail in frigid January. By the time Annie arrives at Better Tomorrow, Gretchen is long dead, the murder weapon, an ax, left beside her. Most everyone considers the handyman, Jeremiah, the culprit, but Henny, the volunteer coordinator, believes him innocent and helps him hide. Annie and her husband Max decide to help vindicate Jeremiah, but their investigation is stymied when the mayor relieves the police chief of his job. With persistence, the amateur sleuths discover that Gretchen may have been murdered because she could recast Everett’s death as not an accident but murder. There’s no shortage of suspects within Everett’s family and business circles, and two murders become three when the Hathaway housekeeper is shot. Henny will be waylaid and Annie accosted in a dense fog before mystery writer Clyde helps deduce whodunit, leading to Jeremiah’s freedom and the police chief’s reinstatement.

The series hallmarks are all here—the Christie-like clues, the multiple motives, the never-ending gossip, the mystery fiction allusions, the cats Agatha and Dorothy L—but where’s the verve, the wicked surprise? Barely mid-level in this venerable series (Dead by Midnight, 2001, etc.).

ROLL OVER AND PLAY DEAD
by Joan Hess
Mystery

AND THEN THERE WERE NONE
by Agatha Christie
Newsletter sign-up