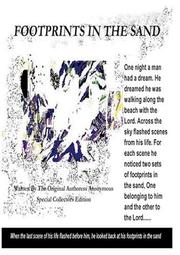 FOOTPRINTS IN THE SAND

The structure of this collection is bound together by some vague information that the uninitiated reader—that is, probably anyone who is more than a couple of degrees removed from its publication—is probably not privy to. The “footprints” of the title is a reference to another poem, published back in 1963, as this book informs us, that describes a twin set of footprints along a beach, one belonging to a man and the other to God. This poem is clearly the inspiration for the current collection, which takes off with the same theme and imagery. As a vehicle for the poems themselves, the book contains a nearly pure outpouring of religious emotion. At its most coherent, some of the longer poems read a bit like a sermon. Elsewhere, short poems, tied together by innocent rhymes, are full of, or based on, an abundance of biblical imagery, mostly about the writer’s relationship with God. From the strange pixelated image on the cover to the free-flowing verse and loose grammar, the entire project has an unrefined feel. In place of polish, the overwhelming veneer consists of raw religious feeling, and the writing is driven by a deeply personal, sentimental Christian spirituality. The work is not scholarly, beyond the casual biblical reference, and the poetry is not particularly crafted—but this does not seem to be the point. Rather, through these poems the author seems to be translating her own spiritual experience, presenting an interpretation of the way religion has woven itself through her life, and perhaps with a bit of moralizing, her understanding of the role it is meant to play for people more broadly.

A highly intimate rendering of one person’s attempt at religious insight.