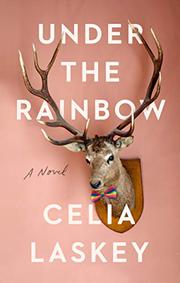 An LGBTQ nonprofit takes its services to rural Middle America in this ambitious debut about the slow wheels of social change.

Big Burr, Kansas, is the most homophobic town in America, which is why Acceptance Across America sends a task force to take up residence there for two long years. Laskey's debut novel chronicles the ups and downs of the social experiment, alternating between the queer volunteers who uprooted their lives in big cities and the residents who have, for the most part, minds as small as their Main Street. There's Avery, the straight daughter of AAA's proud lesbian director, caught between wanting to fit in at the local high school and protecting her out-and-proud family; Linda, the grieving mother who finds solace in volunteering for AAA; Gabe, the closeted father and husband who hides his sexuality behind Carhartts and mounted deer heads; and Harley, the nonbinary social media copywriter for AAA whose neighbors retaliate against them with unflinching cruelty. Laskey inhabits each of these characters with skill and grace in a tour de force of first-person narration that illustrates how dangerous isolated, rural places can be for queer people. However, the conceit of Laskey's novel is troubled, and it requires a certain dependence on stereotypes, queer and straight, urban and rural, open-minded and closed, that hampers its success. Laskey is most convincing when she turns stereotypes on their heads, like the blistering rage and sadness rippling beneath teenage Avery's encounters with the homophobic group of teens who egg her mother's house—forcing her to choose sides. Other characters, like the bigoted Christine Peterson, flounder under the weight of bad marriages and righteous mommy blogs and are driven to unexamined acts of hatred and violence. There are unarticulated class and geographical tensions here, too, between the "liberated" coasts and the "backwards" red states. Laskey seems to suggest that Middle America can only change, reluctantly, with a push from the educated coastal elites who escaped its confines. As AAA's pragmatic director tells one beleaguered task force member, "[Liking] these people isn't a necessary part of it. You have to understand them, but that's different."

Energetic and compelling, a promising first book from a writer to watch.