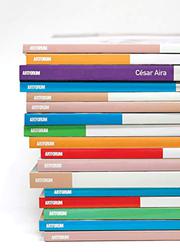 A collection of stories about one writer’s obsession with, of all things, a magazine, attainable but difficult to find in a way he often finds maddening.

Argentinian writer Aira (Birthday, 2019, etc.) has produced more than 100 books, a good number of which have been translated into English. His works tend to be slim and offbeat—a zombie novel here (Dinner, 2015), a kidnapping there (Ema the Captive, 2016)—but they’re always eminently readable. Even this one, which is, yes, pretty much about hunting down a magazine and then, after having taken out a subscription, waiting for it to come in the mail. Is this fiction, as it's labeled, or nonfiction? Aira's work is so personal and frequently peculiar that it doesn't make much of a difference. He's spent a couple of decades thinking about Artforum, judging by the dates at the end of each story—not so much about the magazine’s content as his difficult quest to obtain it. Naturally, he turns each interaction into a beautifully crafted experience, even in the most banal circumstances. Take the opener, “The Sacrifice,” written in 1983, in which an issue of Artforum saves the narrator's other diligently acquired magazines from a particularly vicious rainstorm. Later there are contemplations of the magazine’s price, translated here by Silver as $10, and the personal glory of finally getting a subscription. In 2002, a short-tempered writer goes searching for a trove of Artforums spotted, by happenstance, by a friend. "Conjectures” and “Melancholy" describe the narrator’s state of mind while he waits impatiently for the next issue to arrive in the mail. The writer’s obsession with the magazine is also explained in the context of his life, in which he's always had “the problem of empty time, of ominous afternoons like the open mouth of an abyss.” This book is a slim affair, but for those who want to understand the mindset of an authentic collector, it comes straight from the heart.

A marvelous little collection about compulsion, obsession, and the extraordinary joy that a simple pleasure can bring.

THE LITTLE BUDDHIST MONK & THE PROOF
by César Aira
Fiction

THE MUSICAL BRAIN
by César Aira

INCLUDE ME OUT
by María Sonia Cristoff
Nonfiction

THE WORD OF THE SPEECHLESS
by Julio Ramón Ribeyro
Nonfiction