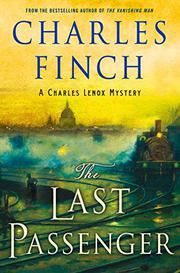 When a violent murder scene yields no obvious evidence, private detective Charles Lenox must solve one of his most complex cases yet.

In this third prequel to the series (The Vanishing Man, 2019, etc.), Lenox is deep in a chess match with Lord Deere, neighbor and husband to close friend Lady Jane, when Inspector Hemstock from Scotland Yard knocks on his door with news of a murder. Lenox arrives at Paddington Station soon after and meets Joseph Stanley, the stationmaster on duty, as well as the conductor of the train where the body was found. When searching the victim’s pockets reveals no form of identification, Lenox discovers that the only real clue is the lack of evidence: The murderer has gone so far as to remove the label from the victim’s suit jacket. Commissioner Sir Richard Mayne gives Lenox permission to assist with the case—an unpopular decision with most of the force. Eager to prove his value, Lenox and his butler, Graham, go in search of passengers on the train from Manchester to London and scan the papers for word of a missing person. While the Yard suspects gang involvement linked to Manchester, Lenox’s investigation places this murder on a global scale when the first person connected to the victim turns out to be American. Politics across the pond are at a boiling point, with the Abolitionist movement gaining strength and whispers of civil war growing louder by the day. The commentary around this is sobering, as it seems so far-fetched to Lenox that civil war could be a possibility, and yet….As the private detective continues to contemplate motive, he’s often distracted by Lady Jane’s attempts to find him a suitable match and end his reign as most-eligible bachelor. This subplot almost takes the spotlight away from the mystery while it provides satisfying backstory for key relationships in the series. Avid mystery readers will enjoy Lenox’s thorough review of his sleuthing process, not in the sense of “this is how I solved this” but rather “this is how I could have done better.”

Overall, a bit more history than mystery. Choose this if you revel in atmosphere.

THE WOMAN IN THE WATER
by Charles Finch
Mystery

THE INHERITANCE
by Charles Finch
Mystery

THE LAWS OF MURDER
by Charles Finch
Fiction

AN OLD BETRAYAL
by Charles Finch

LETHAL PURSUIT
by Will Thomas
Fiction