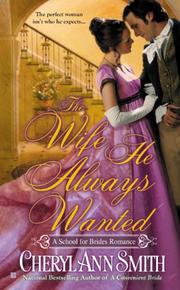 THE WIFE HE ALWAYS WANTED

Abandoned and impoverished, Sarah is completely alone in the world and facing an uncertain future, until a scruffy man appears on her doorstep and offers to marry her, claiming to fulfill her brother's dying wish; despite some misgivings, Sarah accepts his proposal, eager to start a new life and perhaps shed some light on the mysteries of her past.

Ten years ago, Sarah's father was murdered, and her brother, Albert, spirited her and their aunt away from London into a small cottage in the middle of nowhere. Now, her aunt and brother are dead, and Sarah has no means of survival. Just when her future looks particularly bleak, Gabriel Harrington knocks on her door and announces that on his deathbed, Albert asked him to marry her. The man looks like he's walked across the colonies—which isn't too far from the truth—but promises her that he's from a good family and will be able to take care of her. Despite some serious reservations, Sarah agrees. She has long yearned to return to London to see if she can find some clues as to what happened to her father. As Albert's friend, Gabe has some insight into what happened, but together, the husband and wife will search for answers and come into the cross hairs of a dangerous adversary. However, along the way, Sarah will be welcomed into the loving embrace of Gabriel's family, an experience that completes her in a way she never expected. Thrown together in an unorthodox way, Sarah and Gabriel nevertheless realize that they were meant to be together. Now, they must stay alive and vanquish their enemy in order to win their happily-ever-after. Smith pens an engaging follow-up to The Convenient Bride (2012) in her School for Brides series. Despite a continued penchant for occasionally whipping up annoying conflict where none actually exists, and writing inconsistencies into the text (one moment he sees spirit in Sarah's eyes, and two pages later, he is surprised to see spirit in the eyes of the seemingly meek woman), this book is significantly more balanced than the last one. With an intriguing mystery and a sense of shared purpose to bring Sarah and Gabe together, the plot moves forward quickly and keeps the reader interested in the romance and the investigation.

A novel hook, a touch of intrigue and a well-plotted storyline will keep most romance readers engaged.

ANY DUCHESS WILL DO
by Tessa Dare
Fiction

AN ENGLISH BRIDE IN SCOTLAND
by Lynsay Sands
Fiction