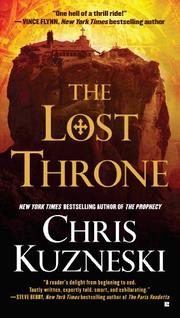 Well-plotted thriller turns on ancient secrets, savvy sleuths and other matters to do Indiana Jones proud.

There’s a hidden treasure to rival Solon’s here, plus extremely bad guys, and good guys who don’t play by the rules. The whole saga is set against a little-explored backdrop: mountainous northeastern Greece, home to devout monks who are very good at keeping secrets and very bad at defending themselves. Kuzneski (Sword of God, 2007, etc.) opens on an ominously antiquarian note. “The greatest secret of Ancient Greece was silenced by a death in Italy”—a death in Naples on Christmas Day 1890, to be exact, and portending “fire, deception, and ancient gold.” Portent reigns throughout, sometimes ham-fistedly. As we careen into the present, we find a blade-bearing evildoer and his henchmen inside the sanctuary of an Orthodox monastery, to an unhappy effect for the monk on deck: “He punctuated his statement with a flick of his sword, separating the monk from his head…Head on the left. Body on the right. Blood everywhere.” Enter the Americans in the form of Delta Force types known as MANIACS (“the top soldiers from the Marines, Army, Navy, Air Force, and Coast Guard”). So what’s Uncle Sam doing mixing it up with bearded heretics halfway across the world, to say nothing of the long-suffering Greek cops in charge of cracking the case? Could be it has something to do with clerics flying under false colors, or unfinished Cold War business, or the clash of civilizations, but it wouldn’t be sporting to say. Kuzneski steers his narrative through enough satisfying twists and turns to resemble a Mediterranean goat path until the mystery is revealed and the killers of “ten monks, three cops, and a fucking mule” and chastened.

Good for late summer at the beach.

THE PROPHECY
by Chris Kuzneski

THE WAY OF SORROWS
by Jon Steele
Fiction

THE END OF SPARTA
by Victor Davis Hanson
Newsletter sign-up