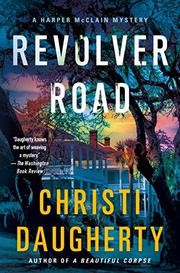 A driven reporter works a murder while hiding from a stalker.

Harper McClain’s Savannah paper has been teetering on the verge of bankruptcy as the rapacious owner cuts staff to support her lifestyle. Since a warning from an unknown man that her mother’s killer has her in his sights (A Beautiful Corpse, 2019, etc.), Harper has fled her apartment for a rental on nearby Tybee Island, where she keeps a low profile. Her boredom is alleviated when friends report that up-and-coming music star Xavier Rayne went for a walk on the beach and never returned. Talking their way into Rayne’s rented Tybee mansion, Harper and her photographer meet his girlfriend, actress Cara Brand, his keyboardist, Hunter Carlson, and backup singer Allegra Hanson, all distraught over his disappearance. Harper’s had a special relationship with the police ever since Robert Smith, the detective assigned to her mother’s murder, watched over her when her father remarried, moved, and started a new family. When she exposed Smith as a murderer, that relationship was ruined along with her on-again, off-again love affair with homicide detective Luke Walker. The present case heats up when Rayne’s found shot to death. Harper receives a cryptic message telling her to look into gangster Martin Dowell, who’s just been released from prison, and his lawyer, who turns out to have been Harper’s father. Her source warns her that Dowell may be out for revenge. Continuing to cover Rayne’s murder, Harper finds it difficult to believe that any of the friends the police clearly suspect could have killed him. Fearing for her life, she buys a gun and starts looking for somewhere else to live. Although Harper and Luke have serious doubts about being able to maintain their relationship, they’re still deeply in love, and Luke helps her in every way he can while she tries to escape her mother’s fate.

An exhilarating hunt neatly dovetails with the complex heroine’s determination to find her mother’s killer.