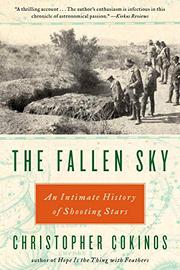 Sprawling adventure memoir and natural history of meteorites from Cokinos (English and Creative Writing/Utah State Univ.; Hope Is the Thing With Feathers: A Personal Chronicle of Vanished Birds, 2000).

In his quest to understand the passions of the opportunists, innovators and romantics that popular the history of meteorites, the author traverses the globe, tracing their footsteps, absorbing their stories and, ultimately, understanding their obsession. Cokinos follows meteorites to Greenland, New Zealand, Europe and Antarctica, and in each location comes away with a stronger sense of how these mysterious chunks of space rock have affected humanity—including the still-looming, though remote, possibility of a future catastrophic impact. Carrying 4.5 billion-year-old material, meteorites provide scientists with the opportunity to examine ancient organic matter and deduce important developments of the primordial universe. Some researchers even suspect that meteorite impacts, such as the one that caused the Lake Acramen crater in Australia, “sparked the first extensive rise of complex life on Earth.” Throughout his well-paced narrative, the author’s naturalist tendencies bloom in his lush descriptions of his surroundings. The last section, which details an arduous trip to the far frontiers of Antarctica, is a thrilling account of the extreme psychological and physical endurance required to complete such field research. His emotions sharpened in isolation, Cokinos writes in awe of the similarities between mountains in Greenland and the South Pole, and meteor craters in Arizona and Australia. He’s also amazed by the almost identical way different indigenous groups spiritualize meteorites, and by the insistent pull of home wherever his research took him. It’s a unique thrill to be the first human to step on a certain sheet of ice or to touch the oldest known meteorite, but Cokinos concludes that “the marvels of adventure are nothing beside the clarities of home.”

The author’s enthusiasm is infectious in this chronicle of astronomical passion.