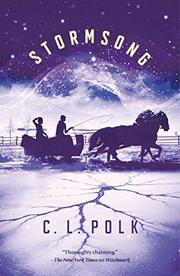 A young politician confronts affairs of state, the dark secrets of the past, considerable emotional turmoil, and the weather in this follow-up to the World Fantasy Award–winning Witchmark (2018).

The country of Aeland reels after the events of the previous volume, in which Dame Grace Hensley’s brother Miles discovered that the aether network (a magical equivalent of electricity) was being powered by the souls of the dead, the brutal war with neighboring Laneer was trumped up to grab Laneeri souls for the network, the Laneeri retaliated by possessing the returning Aelander soldiers and forcing them to murder innocents, and their father was complicit in most of it. The people are angry about the loss of aether, and they would be angrier still if they knew that many of the nobles were secret witches who thrust common witches into asylums to exploit their powers. As the country’s new Chancellor, Grace is supposed to calm the people, maintain the status quo, and mollify the Amaranthines, the faerylike psychopomps who condemn the aether network’s abuse of souls. As the Voice of the Invisibles, Grace must lead a cabal of unwilling mages to quell the worst storms that Aeland has seen in centuries. But she has no support from her scheming peers, and her imprisoned father, the former Chancellor and Voice, is clearly manipulating events behind the scenes. Grace would like to free the witches and finally be honest with Aeland’s people, but she fears it will cause mass riot. However, others are forcing her hand, including Miles’ friend Robin, a medical student and secret witch, and Avia Jessup, an astute and dangerously attractive former heiress–turned-reporter who’s nearing many explosive truths. Grace is an intriguing contrast with her brother Miles, protagonist of Witchmark, who has a much more black-and-white sense of morality. Grace was the designated heir to her father’s several types of power; and while she now despises him, freeing herself of his influence and ruthless love isn’t easy for her. She has good intentions toward the people of Aeland, but she has no idea about how the other half lives. She takes her comforts for granted even as she neglects her own desires in the service of others, exemplified by the narrative’s emphasis on the many meals she misses in the course of her duties.

A thoughtful and passionate depiction of one woman’s struggle to discover her truest self.