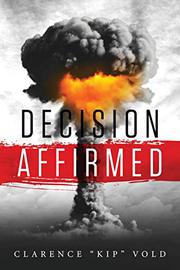 A writer offers a defense of Harry Truman’s decision to drop atomic bombs on Japan to end World War II.

Though Americans at the time viewed the use of atomic bombs against Japan as a “legitimate” means “to hasten the end of a long and bitterly fought war,” Vold (Farmer’s Son, Military Career, 2015) laments that too many revisionist historians today question the decision “on the basis of morality, legality, and necessity.” The bulk of his narrative provides a thorough and straightforward, if already well-documented, military history of the conflict between Japan and the United States during World War II. On their own, these chapters serve as a useful survey and introduction to the ferocity of the Pacific theater, and bolster his ultimate argument that the use of atomic bombs was necessary to prevent further brutality. With this context set, nearly 300 pages in, the author pivots to his goal of affirming Truman’s decision by taking on the president’s modern-day critics. To those who argue he could have used naval blockades in lieu of atomic weapons, for example, Vold contends that “those killed immediately by an atomic bomb explosion suffer the least” when compared to “those starving to death as the result of a blockade.” More importantly, he emphasizes that the end result of atomic warfare was that it led to a democratic and peaceful postwar Japan. The ends, or “results achieved,” justified the means. This amoral approach is characteristic of the author’s skepticism of moral arguments against using the bombs, as he claims “morality is an emotional issue…based on personal beliefs rather than a logical point of view.” Given his predilection for conventional military history, it is no surprise that his defense of Truman’s decision is in the realm of combat and geopolitical strategy. But a greater engagement with the social and cultural histories of the war is necessary to fully understand the nuances of American attitudes toward the Japanese. What role, for example, did propaganda that depicted Japanese soldiers as subhuman insects and animals play in Truman’s decision? Surprisingly, American racial attitudes are absent from Vold’s narrative.

A justification of Truman’s atomic bomb decision that overly relies on military and geopolitical history.