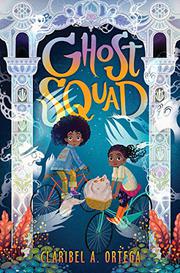 After unwittingly unleashing dead spirits on St. Augustine, Florida, Lucely Luna works to restore the city with the help of friend Syd and the spirits of her family.

Dominican American Lucely Luna lives with her family. Her father, Simon, runs a ghost tour business. The rest of them are deceased but are still very much in her life, their spirits appearing to her as cucuyos, or fireflies. Alarmingly, after one ghost tour, the spirit of Lucely’s grandma, Mamá, goes dim. At school, Lucely learns of Las Brujas Moradas, witches who fled Spain during the Inquisition and who were reputed to have a lost spell book. Lucely and her best friend, Syd, decide to look for a spell that can awaken the dead so they can wake Mamá up, so they prowl through the library of Syd’s grandmother Babette, who owns an occult shop. When they recite a spell they find there, they accidentally awaken other—evil—spirits of the town. Lucely and Syd join forces with Babette and Lucely’s spirit family in the fight to save St. Augustine and Mamá. Lucely’s action-packed and ghost-filled adventures unfold briskly, with seamlessly incorporated and unitalicized Spanish. While it’s undeniably a ghost story, Lucely’s love for her family, both corporeal and spirit, carries the narrative, giving it warmth and depth. Readers will root for Lucely and Syd as they try to save St. Augustine and Lucely’s cucuyos. Both girls present black on the cover.

LALANI OF THE DISTANT SEA
by Erin Entrada Kelly
Children

DRAGONS IN A BAG
by Zetta Elliott
Children