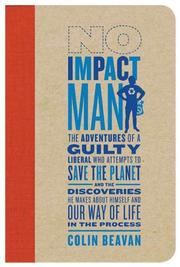 The Adventures of a Guilty Liberal Who Attempts to Save the Planet--and the Discoveries He Makes About Himself and Our Way of Life in the Process
by Colin Beavan
BUY NOW FROM
AMAZON
BARNES & NOBLE
LOCAL BOOKSELLER
GET WEEKLY BOOK RECOMMENDATIONS:

In 2006, at the age of 42, the author was convinced he was no better than any finger-pointing liberal shucking his own guilt, overwhelmed and feeling helpless in his ability to stem consumerism and slow global warming. Consumption of “stuff,” he writes, is inspired by ads that say, “You suck, but if you buy this, you won’t, and then everyone will love you.” Unfortunately, in the minds of American consumers, “We’re too busy for love because we're working to get the stuff that the ads say will bring us love.” In order to empower himself through action, Beavan decided to make a drastic change. Pitching his next book to his agent, he explained that he wanted to write about an experiment in which he came as close as possible to living a no-impact lifestyle—all with a wife, toddler and dog in New York City. The author stopped buying new products and started using the Yahoo! Freecycle Network and Craigslist to procure only secondhand goods. Also, television and air-conditioning were banned; disposable diapers were swapped out for cloth; water was conserved by the entire family sharing the same bathwater “on bath day”; baking soda was employed for deodorant and toothpaste. All the while, the author continued to ask himself tough questions about whether or not his new living habits were actually effecting positive change. With thorough research, Beavan updates his blog (noimpactman.com) with convincing statistical evidence, while discovering new ways to reduce consumption and his family's environmental footprint. “It is time for people to take up the reins of government and business and force the change we want and need,” he concludes after his one-year experiment. “We cannot wait for leaders. We are the leaders.”

An inspiring, persuasive argument that individuals are not helpless in the battle against environmental degradation and global warming.