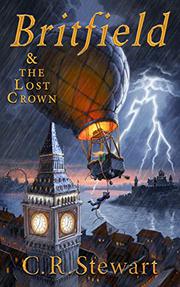 After escaping from an abusive British orphanage, two friends travel, face danger, and learn of a deep conspiracy in this debut middle-grade novel.

Although it’s the 21st century, the Weatherly orphanage in Yorkshire, England, run by Mr. and Mrs. Grievous, resembles an institution straight out of Dickens. The orphans are worked hard all day to make sellable items; they get little food, wear tattered clothing, and receive harsh punishments. Twelve-year-old Tom came to Weatherly six years ago, having lived in a string of orphanages since he was a child. He’s close friends with Sarah Wallace, also 12, who’s been orphaned for two years. It’s time to escape, Tom figures, especially when Mr. Grievous taunts him with the information that his parents are still alive. Tom and Sarah make a risky breakout, but on their trail is Detective Arthur Gowerstone, a legendary finder of runaway orphans. Tom and Sarah evade him by stealing a hot air balloon. In Oxford, they meet a friendly professor who guides them to Windsor Castle, where he believes the butler, a former student, will help. But Tom and Sarah soon run straight into a conspiracy carried out at the highest levels that involves the royal succession; nowhere in England is safe. In this series opener, Stewart offers nearly nonstop action, with escapades both perilous and amusing, and exhilarating hairsbreadth escapes. The conspiracy is bold and compelling while the plot folds in intriguing facts about British culture, history, and famous sites. Verisimilitude falters, though; for example, orphanages no longer exist in Britain. And if the orphans never go to school, how do they learn to read the books that are their only pleasure? Another bar to enjoyment is an overabundance of adverbs, which call too much attention to themselves (“whispered enthusiastically”; “replied nonchalantly”; “added earnestly”; “said graciously”; “added philosophically”). Another problem is some underlying sexism; Tom is usually the active partner while Sarah tends to fall down and need rescuing or comforting.

A flawed but exciting, fast-paced, and intriguing adventure.