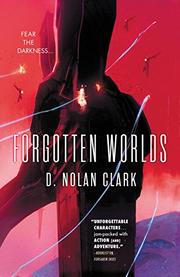 Giant flying heavy-planet alien jellyfish known as the Blue-Blue-White have dispatched fleets of robot drones to destroy all sentient life in the galaxy. Just because, OK? Fortunately, the fleets travel at sublight speeds, so there’s a long time between attacks. Humans, meanwhile, have learned how to use a network of wormholes to travel more rapidly. Previously, a small detachment of ships commanded by 300-year-old ex-Navy pilot Aleister Lanoe defeated the robot drones at planet Niraya, but hundreds more fleets are on the way. Then a mysterious message arrives promising help. Against the unremitting and largely inexplicable hostility of the polys—after all, what would they do if the aliens win?—a desperate Earth equips Lanoe with a new ship and sends him off to find out what the message means and, hopefully, find some allies. Afraid of poly spies, Lanoe dismisses the entire ship’s complement and brings in his own people. Other characters familiar from the previous book include Tannis Valk, an artificial intelligence who thought he was human and now wants only to be permanently switched off, and con man Auster Maggs, who could share an Oscar with Jar Jar Binks for Most Annoying Character Ever. The action features a hair-raising passage through a seriously weird wormhole, a thrilling battle inside one, and sundry other Star Wars–like actions, while the plot culminates in a well thought-out alien encounter, but it takes a huge effort to push past the smothering wallpaper and soporific chat to get there.

Patchy but overall a notch above mediocre. Fans of the previous should be happy enough.

THE DARK BETWEEN THE STARS
by Kevin J. Anderson
Sci-Fi