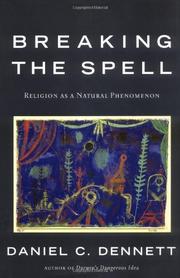 An exploration of modern scientific theories of religion, framed by an argument that society must overcome its “spell” against studying religion as a natural, evolutionary occurrence.

Dennett (Center for Cognitive Studies/Tufts), a National Book Award finalist for Darwin’s Dangerous Idea (1995), seeks to expose religion to the systematic tools of modern science. It is too important in our global culture to leave unstudied, he arguespointing to instances in which religion has proven dangerous to society (e.g., radical Islam, the Heaven’s Gate cult, etc.). Dennett then presents material from various researchers regarding how religion has evolved in human cultures. By drawing attention to theories that shaman “healing” practices, group cohesion and loyalty to ideas beyond the self have been a part of human evolution related to proto-religions, the author demonstrates why the existence of religious practice may have developed so uniformly in all human cultures. When broaching more developed and institutionalized forms of religion, however, he steps onto thinner ice. In concluding that many people believe more in their traditions than in the dogma and doctrine of their faith, and in pointing out inconsistencies between scriptural authorities and modern theologies, Dennett observes religion from an outsider’s vantage point. This is, of course, his goal as a researcher, but it leads to a tendency to dismiss the role of faith, often by setting up straw men to knock down for the sake of his thesis. For instance, he states that, to many, faith is much like being in love, then concludes that love can delude individuals and even be bad for them. This analogy may not prove very convincing to the faithful. Dennett seems certain that many will indeed vigorously refute his work, but sees this as a worthwhile risk for starting the conversation.

An intriguing argument, but one not likely to persuade any but the most heterodox of religious adherents.

FROM BACTERIA TO BACH AND BACK
by Daniel C. Dennett
Nonfiction

INTUITION PUMPS AND OTHER TOOLS FOR THINKING
by Daniel C. Dennett
Nonfiction

A HUMANITARIAN PAST
by Adele Anggard
Indie