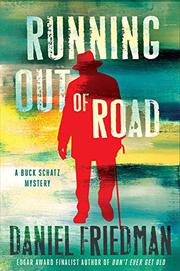 RUNNING OUT OF ROAD

Facing the inevitable decline of old age, a feisty detective is forced to assess his past.

Buck Schatz (Don’t Ever Look Back, 2014, etc.) stared down a formidable array of adversaries during his career on the Memphis police force, from low-level grifters to escaped Nazi commandants. And not all the bad guys were on the other side. Stuck-up supervisors and kkklannish colleagues let Buck know that as a Jewish cop in the South, he’d need to be twice as good to be considered even half as good. Still, he’s never had an adversary as ruthless as his latest nemesis: his own body. He and his wife, Rose, consult a cavalcade of doctors: a neurologist to help befuddled Buck manage his moderate dementia, a cardiologist, an audiologist, a gastroenterologist, and an ENT. Now Dr. Feingold, an oncologist, has been snuck into the mix. Overwhelmed by medical decisions he can barely understand, much less participate in, Buck takes refuge in something he finds much simpler and clearer: the battle between good and evil. Carlos Watkins, an NPR reporter, wants to rehash an old case of Buck’s. Chester March, who was convicted for killing a bunch of women in the 1950s, is finally slated to be executed for his crimes, and Watkins wants to use him to make a public case against capital punishment. Buck’s lawyer grandson, Tequila, warns him to steer clear, but when has Buck avoided a fight? Should you, will you, and how can you fight the reaper are questions Friedman handles with amazing grace.

DON'T EVER LOOK BACK
by Daniel Friedman
Mystery

DON'T EVER GET OLD
by Daniel Friedman
Newsletter sign-up