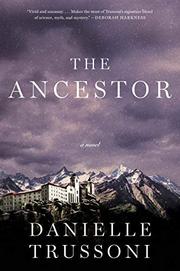 Scientific speculation seeps into the world of the eerie in Trussoni's (The Fortress, 2016, etc.) lush thriller.

Alberta Monte, known to all as Bert, is mourning a miscarriage and has recently separated from her husband when she receives a letter at her Hudson Valley home informing her that she has been identified as the last living descendant of the House of Montebianco. Despite a “creeping sense of danger slithering up my spine,” Bert allows the estate's lawyer to sweep her off by private jet first to a luxury hotel in Turin and then by helicopter to Montebianco Castle in the remote, snowbound Italian Alps. Finding herself without cellphone or internet access, and observing that the helicopter pilot doesn't return for her at the promised time, Bert begins to suspect that her inheritance has its minuses as well as its pluses. Life inside the castle, which comes complete with eccentric caretakers, vicious guard dogs, and a madwoman in the attic, is hard enough. Outside the castle live blue-eyed, white-haired, big-footed monsters with whom, she comes to understand, she shares a surprising kinship. As she discovers her links with those inside the castle and outside it, her sense of danger grows. Trussoni plays here with the contemporary obsession with using DNA to uncover the past and employs some far-fetched scientific theories to explain the nature and existence of the humanoids that Bert gradually realizes are somehow connected to the complicated bloodline of the mysterious Montebiancos. Few, however, are likely to read the novel for its insights into genetics and biology. At its heart, this is an opulently romantic horror tale, with a plucky, if not always sensible, heroine who discovers she is part of a family whose dark secrets have been sheltered from the world at large.

THE FORTRESS
by Danielle Trussoni
Sci-Fi

FALLING THROUGH THE EARTH
by Danielle Trussoni
Newsletter sign-up