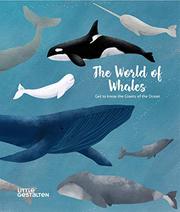 THE WORLD OF WHALES

Get To Know the Giants of the Ocean
by Darcy Dobell ; illustrated by Becky Thorns
Age Range: 8 - 12
BUY NOW FROM
AMAZON
BARNES & NOBLE
LOCAL BOOKSELLER
GET WEEKLY BOOK RECOMMENDATIONS:

Fascinating facts about whales, dolphins, and porpoises, presented from an underwater perspective.

This handsome and generous pictorial introduction to cetaceans demonstrates both the variety and the value of this group of ocean dwellers in an engaging way. What’s striking is the amount of information conveyed. An illustrated table of contents, organized into three sections—baleen whales, toothed whales, and the world of whales—is followed by two spreads describing the evolution of these aquatic mammals from a four-legged “cat-sized plant-eater.” The thoughtful design intersperses spreads about whale life among spreads about individual species: fin, humpback, bowhead, blue, gray, minke, and right whales; Cuvier’s beaked, beluga, and sperm whales; orcas, porpoises, dolphins, and narwhals. Short paragraphs, many with descriptive titles, are set against relevant, realistic illustrations. The backgrounds of these pages are all shades of blue. Most depictions of specific species include a measuring stick in 3-foot segments (metric equivalents are provided), a tiny silhouette of a scuba diver to compare relative size, and car and bus icons (explained in the glossary) to indicate their weight. The blue whale segment folds out, reflecting its tremendous size. Most spreads include an inviting “Did you know?” fact, noted with a sea star. Finally, the author offers some facts about the ocean in general, some ways that whales are threatened, and how humans can help.

A pleasing and informative package with surprising depth. (glossary) (Nonfiction. 8-12)