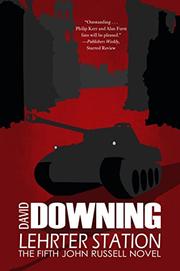 Readers of Downing’s lucid, deftly plotted spy series will know that in the preceding volume, Potsdam Station (2011), the British/American journalist/spy has his bacon saved courtesy of the tender mercies of the Soviets, who see to it that he finds his story in an about-to-fall Berlin while at the same time rescuing his girlfriend, a famed film actress named Effi, and son Paul. There’s a price to pay, of course. First, the Reds wanted Russell to do a little on-the-ground sleuthing for them in the ashes of Berlin; now they want to insert him into the inner recesses of the budding American intelligence machine. Meanwhile, in Germany, the war has never ended, at least for some: “The man’s a genius,” says one loose-tongued fellow of a complexly bad guy. “None of them are really Jews, but he gets all the kudos for helping them. The Americans lap it up. A gangster with a real soft spot—that’s what they think. A German Robin Hood.” And meanwhile as well, Effi has been involved in an underground railway to get Jews out of Germany to the safety of Palestine, work that has new urgency even as it requires digging into the past. Downing has a master’s touch when it comes to setting up tense situations that seem destined to end very badly indeed, so that Russell has no end of tough scrapes. Still, the resolution of this book seems a little odd, almost an afterthought, which may simply underscore the fact that, as John le Carré has taught us, in the Cold War there were never any neat victories.

A pleasure for fans of the series, though newcomers will want to make their way to the beginning and read Russell’s adventures in sequence.

THE SUMMER OF THE BEAR
by Bella Pollen
Fiction

THE AGE OF TREACHERY
by Gavin Scott
Fiction