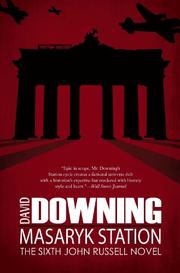 Downing returns with another taut tale of espionage as World War II shades deeper into the Cold War and good guys get harder to tell from bad.

Named, as with the five books preceding in his series, for a continental European train station, Downing’s latest finds hero—or antihero, for he’s of a John Le Carré cast of dubious servant—John Russell struggling to keep from being found out. He’s a double agent, you see, working for both Joseph Stalin and Harry S. Truman in the fraught year of 1948, and there are plenty of people gunning for him. Ostensibly a journalist, Russell has a talent for getting people to open up to him, a talent that may prove his undoing. The station in question is in Prague on the way to the Balkans, where some particularly unpleasant opponents of the rising Tito regime (“they had routinely committed atrocities the Nazis would have shrunk from”) are doing particularly unpleasant things. Of course, the Soviets are intriguing against Tito, too, as is the CIA, which makes for some particularly unlikely bedfellows as the story progresses. Russell isn’t necessarily likable, but he’s certainly believable, as are his motives—chief among them keeping his beloved Effi, a German actress, and their child alive and well. Downing writes with a sure grasp of the way bad situations become worse (“Oh, shit, Russell thought, a psychopath with an identity crisis”); he’s a master of heightened tension and the sweat-bedewed upper lip, and he shares with Le Carré a cynical sense that no matter how things turn out, the wrong people will have carried the day. The local color and cigarette smoke are thick, and so is the plot, with fine MacGuffins, a truly red herring or two, and even a man in the boot to keep things interesting.

Will Russell want to face another narrow scrape? By every evidence, this ends the series—but Downing seems to leave room for another adventure. Stay tuned.