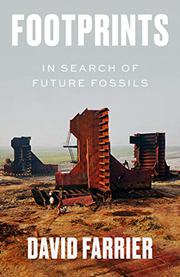 Elegiac views of the Anthropocene, an age of decline in everything but the consumption of plastics.

There have been many recent books on the environmental terrors of the present era, from Elizabeth Kolbert’s Sixth Extinction to Gaia Vince’s Adventures in the Anthropocene and Barry Lopez’s Horizon. Farrier (English Literature/Univ. of Edinburgh; Anthropocene Poetics: Deep Time, Sacrifice Zones, and Extinction, 2019, etc.) adds a side note to these more urgent and compelling books with a fruitful premise: It’s up to us, to some degree or another, to determine what we’ll leave in the fossil record, and those future fossils will in turn “record whether we carried on heedlessly despite the dangers…or whether we cared enough to change our course.” Though the great British ecologist James Lovelock has lately expressed doubt that our kind is smart enough to fix the mess we’ve caused, Farrier takes a more generous view. On the matter of plastics, for instance, he doesn’t dispute that at first, they seemed a wonderful thing, a substitute for so much else that was fragile or scarce. However, as the author puts it, if the world’s factories were producing 2 million metric tons of plastic in 1950, “by 2015, it was four hundred million,” and not only that, but “it is likely that every single piece of plastic ever produced and not incinerated still exists somewhere in some form.” Elsewhere, Farrier looks at the structure of landfills, the nature of cities, the alarming decline in the quantity not just of terrestrial species and their members, but also those of microbiota, the collapse of coral reefs—a collapse that can be bandaged but not undone by, yes, plastic poultices—and the eerie silences that surround a world in collapse even amid all the noise humans make. The feel of the text is matter-of-fact melancholic, a too-little, too-late somberness. If those other books (and others besides them) have already reported most of the data, the author captures a moment that finds us standing on the brink.

There’s not much new here, but Farrier sounds a convincing argument all the same.