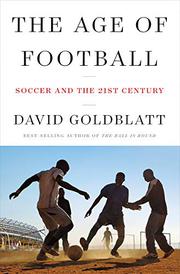 THE AGE OF FOOTBALL

A learned, wide-ranging study of football—soccer, that is—as something that’s much more than just a game.

The French philosopher Guy Debord devoted much attention to the spectacle, which is meant, writes Goldblatt (The Games: A Global History of the Olympics, 2016), to “not just distract but commodify, blind and stupefy too.” That’s one function of sports—namely, to keep us from recognizing what’s going on around us. The author, who may know as much about soccer as any person on the planet, takes the story far beyond that, into realms that particularly embrace politics, those systems that make things happen to people. One instance among dozens is the place of soccer in Hungary, a nation headed by a neofascist who once played the game himself and who has built an outsized stadium in his home village, “held up by huge, breathtaking trusses of laminated mahogany set in the great fan patterns of a Gothic cathedral.” Other intellectuals come and go in Goldblatt’s pages, including the Argentine writer Jorge Luis Borges, who commented, “football is popular because stupidity is popular.” The sneer is unnecessary, but the fact is that soccer is the world’s single most popular spot—and is even gaining ground in the U.S. and China, which had previously ignored it. Goldblatt does a lot of on-the-ground footwork to track the game’s fortunes, observing that Asia is emerging as a soccer power; Africa has superb players hampered by lack of money; and the game is growing by leaps even as the corruption surrounding it is breathtaking and even if it often seems an expression of warfare by other means, as when, in a match between South Korea and China, “Chinese authorities surrounded the Korean squad and the stadium with thousands of troops.” There’s no corner of the globe that Goldblatt doesn’t explore, and his book updates and overshadows Franklin Foer’s How Soccer Explains the World (2004).

Superb: Essential reading not just for fans of the sport, but also for students of geopolitics.