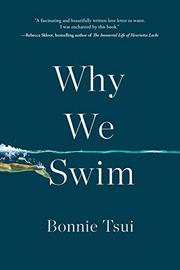 A study of swimming as sport, survival method, basis for community, and route to physical and mental well-being.

For Bay Area writer Tsui (American Chinatown: A People's History of Five Neighborhoods, 2009), swimming is in her blood. As she recounts, her parents met in a Hong Kong swimming pool, and she often visited the beach as a child and competed on a swim team in high school. Midway through the engaging narrative, the author explains how she rejoined the team at age 40, just as her 6-year-old was signing up for the first time. Chronicling her interviews with scientists and swimmers alike, Tsui notes the many health benefits of swimming, some of which are mental. Swimmers often achieve the “flow” state and get their best ideas while in the water. Her travels took her from the California coast, where she dove for abalone and swam from Alcatraz back to San Francisco, to Tokyo, where she heard about the “samurai swimming” martial arts tradition. In Iceland, she met Guðlaugur Friðþórsson, a local celebrity who, in 1984, survived six hours in a winter sea after his fishing vessel capsized, earning him the nickname “the human seal.” Although humans are generally adapted to life on land, the author discovered that some have extra advantages in the water. The Bajau people of Indonesia, for instance, can do 10-minute free dives while hunting because their spleens are 50% larger than average. For most, though, it’s simply a matter of practice. Tsui discussed swimming with Dara Torres, who became the oldest Olympic swimmer at age 41, and swam with Kim Chambers, one of the few people to complete the daunting Oceans Seven marathon swim challenge. Drawing on personal experience, history, biology, and social science, the author conveys the appeal of “an unflinching giving-over to an element” and makes a convincing case for broader access to swimming education (372,000 people still drown annually).

An absorbing, wide-ranging story of humans’ relationship with the water.