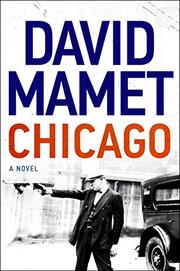 A major bard of the Windy City returns, this time with a novel devoted to the mob era and some of its more minor players.

Aside from a few questionable forays into right-wing politics, Mamet (Three War Stories, 2013, etc.) is heard from too little these days. That’s unfortunate, because few writers are better at bringing the smart, charged dialogue of the theater into conventional prose. "They loved your quip, about 'he died of a broken heart,'" says Parlow, a journeyman writer on every topic of culture and commerce imaginable, to his pal Mike Hodge, a hard-boiled reporter for the Trib who is much admired and much feared. “You should have been there, they picked up the tab for dinner.” “They” are one of the several crews of very bad gangsters who have just “iced” Jacob Weiss, a showman knee-deep in misbehavior. But who? Therein hangs one of several mysteries, the largest of them the identity of the fellow who iced Mike’s girlfriend, Annie Walsh, as Mike and she were freshening up after a tryst. Not a good idea: Mike is a former fighter ace (“He had killed in France, in the air, which he did not mind at all; and killed strafing ground troops, which upset him”) who won’t be thrown off a scent—and the stench of murder and mayhem is thick. The story moves at a careening pace, drawing on a small but memorable cast of characters, with cameos by a few historical figures; the palaver isn’t as snappy as, say, House of Games, but it’s brisk and believable. Readers should note that there’s scarcely an ethnic group that doesn’t come in for a slur along the way, but that’s part of the verisimilitude: these are not nice people, excepting the deceased Annie—and even she has a few dark corners. Of a piece with character studies such as E.L. Doctorow’s Ragtime and John Sayles’ Eight Men Out, Mamet’s book does Chicago—and organized crime—proud.

An evocative, impressive return that Mamet fans will welcome.

SOUTH OF THE NORTHEAST KINGDOM
by David Mamet
Fiction