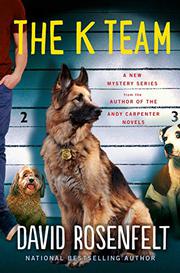 The creator of Paterson attorney Andy Carpenter’s dog-friendly mysteries launches a new series starring several of Andy’s friends and enemies, including the canine client he represented in Dachshund Through the Snow (2019), with a supporting role for Andy himself.

Judge Henry “Hatchet” Henderson, whose courtroom has provided the arena for so many of Andy’s shenanigans, is threatened with blackmail, and he wants the newly formed K Team—retired cop Corey Douglas; his canine partner, Simon Garfunkel; Andy’s fearsome investigator, Marcus Clark; and Andy’s wife, Laurie Collins—to identify and neutralize the threat, which he plans to keep confidential by paying Andy a dollar to take the case as his lawyer. At first the team’s inquiries into which of Henderson’s recent cases (the manslaughter conviction of ex-boxer John Lowry? The freeing of self-confessed embezzler Nina Williams on a legal technicality? The acquittal of Ponzi-scheming broker Drew Lockman?) provoked the blackmail lead nowhere. Then they lead to hints of a financial manipulation conspiracy on a grand scale. By the time they lead to Equi-net, an electronic communications network that handles securities trades for people who’d like to keep them private, five people have been murdered, with more slated to follow. The one place they don’t lead is to continued confidentiality, as Henderson learns to his sorrow. The net of deceptions, double-crosses, and professional assassinations gets pretty knotty, but although the conspiracy involves an awful lot of guilty parties, the gimmick behind all their criminal activity is appealingly simple. Through it all, Corey serves as an investigator and narrator every bit as ebullient as Andy and a lot more diligent. In fact, longtime fans may wonder why Rosenfelt saw the need to create a new series that follows the pattern of Andy’s 20 successful cases so closely. If he thought Paterson needed more wiseacre crime fighters, he was undoubtedly right.

Don’t be fooled by the brand-new packaging. If you liked Rosenfelt’s rollicking previous series, you’ll like this one too.

DACHSHUND THROUGH THE SNOW
by David Rosenfelt
Mystery