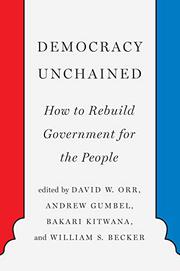 In November 2017, a three-day conference at Oberlin College on “The State of American Democracy” inspired subsequent conversations among participants about how to restore “the promise of democracy” after the stunning election of 2016. Orr (Emeritus, Environmental Studies and Politics/Oberlin Coll.; Dangerous Years: Climate Change and the Long Emergency, 2016, etc.), investigative reporter Gumbel, journalist Kitwana, and Becker, Executive Director of the Presidential Climate Action Project, have gathered cogent, informative essays intended, as Orr writes, “to clarify the historic and institutional origins of the election of 2016 and the growing risk that we are coming unmoored from our history and our highest values.” This risk, the contributors agree, has intensified under the Trump administration, characterized by “mendacity, incompetence, venality, malice” and staffed by “the worst, least qualified, and most unscrupulous” appointees. Jeremi Suri, a professor of global affairs, asserts that Trump, in exploiting citizens’ alienation from government, forces Americans “to rethink the contours of democratic leadership” and portends the viability of “a smaller and humbler presidency, one focused on fewer promises and tethered more closely to ethical limitations.” Environmental activist Judy Braus repeats a call for greater civics and history education in schools to “equip students to become full-fledged citizens, able to make informed, intelligent choices that support the public good.” Jessica Tuchman Mathews, former president of the Carnegie Endowment for International Peace, urges a continuing commitment to treaty-based alliances. Several contributors, including Bill McKibben, focus on climate change as a threat to democracy while sociology professor Michael Eric Dyson joins others in reflecting on democracy and race. Among other topics considered in this wide-ranging collection are the internet, income inequality, the changing voter demographic, the impact of nonaligned voters, and the insidious role of wealthy donors and lobbyists in influencing politicians. The U.S., Becker writes, “is effectively ruled by an unelected plutocratic oligarchy” of “economic elites.” Other contributors include Yascha Mounk, Maria Hinojosa, and Robert Kuttner.

Penetrating analyses of the nation’s ills.