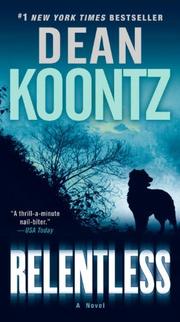 A bestselling author and a death-dealing critic mix it up in this middling effort from thrillermeister Koontz (The Good Guy, 2007, etc.).

Cullen (Cubby) Greenwich has a lot to thank Ralph for—Ralph being the playful name he’s given his guardian angel. In his 30s, lucky Cubby has a beautiful wife, the world’s smartest six-year-old son and a Lassie-like wonder dog named Lassie. Bonus: Whenever he finishes a book it cleaves to bestseller lists with the tenacity of a barnacle. Ah, but Cubby is about to swallow some bitter pills. Suddenly, it seems that Ralph has lost focus, or perhaps ventured off on sabbatical, and Cubby’s life, once so chipper, is plunged into bleakness. It starts with the reviews for One O’Clock Jump, Cubby’s latest. They are raves, minus one. Shearman Waxx, the nation’s most influential literary critic (can there be such a thing these days?) has noticed a Cubby novel for the first time. Cubby smolders, yearns for an encounter and, against the advice of all who love him, including that savvy six-year-old, makes it happen. The results are predictable. Well, not exactly predictable, since it turns out there are dark sides to Waxx. He’s a killer, a description in no way metaphorical. That’s real blood on his hands. Scared silly, the family takes off, Waxx and a bevy of sinister cohorts in hot pursuit for reasons somewhat less than persuasive. Bullets fly, body bags fill, dark conspiracies mushroom. Who, Cubby wonders, could have imagined that a Ralph-less world would be quite so fraught?

Loosely plotted to say the least, but readers who can suspend disbelief after a line like this uttered by a six-year-old—“Mom, you’ve got to convince him to get a new agent”— may find some rewards.