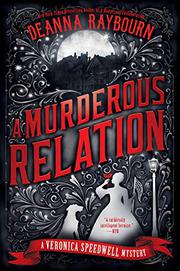 An eccentric pair of late-Victorian detectives delve into a case involving the royal family.

Through many a wild escapade (A Dangerous Collaboration, 2019, etc.), Veronica Speedwell and Stoker Templeton-Vane have danced around their passionate feelings for each other. Just when the highly independent Veronica is about to commit to a full physical relationship—"The truth, dear reader, is that I was as ready for him as any filly ready for the stud"—a new case hurls them into perhaps their most dangerous adventure yet. Lady Wellingtonia Beauclerk, a power in royal circles, calls them to a meeting with the Princess of Wales and Inspector Archibond of Scotland Yard. The meeting is fraught, for Veronica is the unacknowledged daughter of the Prince of Wales, who deserted Veronica and her Catholic mother to marry Alexandra of Denmark. Since the Yard is overwhelmed with the hunt for Jack the Ripper, who’s terrorizing London, Archibond asks the sleuthing duo to recover a diamond star that the princess's eldest son, Prince Albert Victor, aka Eddy, has given to Madame Aurore, the owner of a private sex club. At first the sleuths decline, but when Lady Wellie suffers a severe angina attack, some snooping reveals her fear that Prince Eddy is suspected of being the Ripper. With the help of Stoker’s brother, they attend a masked ball at the club whose members indulge in all sorts of sexual depravity. After an exciting and informative evening, they run into Eddy, a dim but likable lad, who’s with them when their attempt to open Aurore’s safe ends with their discovery of her body under her bed. All three are kidnapped by Veronica’s Uncle de Clare, an Irishman who wants to place Veronica on the throne and free Ireland. Now they must escape, return Eddy unharmed to the bosom of his family, and discover who murdered Aurore.

A rollicking tale of desire, murder, and mayhem complete with Victorian atmosphere and two bickering leads.

A SPEAR OF SUMMER GRASS
by Deanna Raybourn
Newsletter sign-up