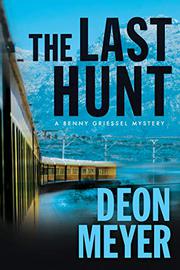 A man who fell, or jumped, or was pushed, off a fast-moving car of “the most luxurious train in the world” poses a knotty problem for Capt. Benny Griessel and Capt. Vaughn Cupido of the South African Police Service—a problem that keeps getting worse the more closely they look into it.

Since leaving the SAPS himself, Johnson Johnson has worked as a private bodyguard. He did an exemplary job protecting Dutch tourist Thilini Scherpenzeel, his client aboard the exclusive Rovos Rail train bound for Pretoria, but did much less well by himself. Eight days after vanishing from the train, he’s found with his head crushed along a deserted stretch in the Great Karoo. What disturbs Griessel and Cupido (The Woman in the Blue Cloak, 2019, etc.) even more than the absence of obvious clues, the looming jurisdictional squabbles, and the obtuseness of DS Aubrey Verwey, the Beaufort West cop who informs them of the body, is the unmistakable signs of a coverup. Both Griessel and Cupido are sensitive to “the state-capture mess,” the rampant signs that particular government officials and institutions have been corrupted by criminal conspiracies, and they’re both happy that although their boss, Col. Mbali Kaleni, may have her issues, neither she nor their unit has been captured. But it becomes increasingly clear that other agencies determined to dismiss Johnson’s death as an unfortunate accident are motivated by more sinister forces. As the investigation moves haltingly forward, Meyer keeps cutting away to follow Daniel Darret, a soldier of fortune self-exiled to Bordeaux, who’s targeted first by some young toughs seeking revenge for his rescue of painter Élodie Lecompte, then by his old comrades in arms who want him to volunteer for a mission that will stretch his loyalties to their limit, require of him heroic self-sacrifice, and entangle him in the death of Johnson Johnson in a shattering climax.

A double-barreled tale that’s sprawling, shape-shifting, and, in the end, deeply satisfying.

THE WOMAN IN THE BLUE CLOAK
by Deon Meyer
Fiction