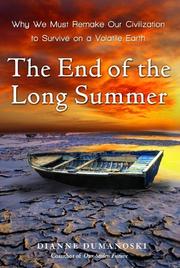 THE END OF THE LONG SUMMER

A passionate, precise account of climate change and a persuasive strategy for dealing with “Nature’s return to center stage as a critical player in human history.”

Though the media usually bemoans global warming from vast industrial carbon-dioxide release, science and environmental journalist Dumanoski (co-author: Our Stolen Future: Are We Threatening Our Fertility, Intelligence, and Survival?, 1996) describes additional problems such as “global fertilization” from fertilizer runoff, which pours into oceans and causes explosive growths of algae that result in dead zones with oxygen levels too low to support animal life. The author interviews scientists who agree that human activity is quickening climate change, but they add that this is not necessarily a gradual process. New research reveals that when certain factors—rising carbon-dioxide levels, melting polar ice—reach a “tipping point,” changes in weather, temperature or sea level can occur with disastrous speed—within decades. Turning to solutions, the author avoids the usual jeremiad about returning to simple village life, instead delivering an insightful overview of our evolution. Humans, she points out, have adapted to every conceivable environment from the arctic to desert wastelands to jungles. Since we are capable of not merely existing but thriving in a world without unlimited energy and consumer goods, it’s necessary to continue to be proactive, rather than fleeing the problems confronting our planet. This will require numerous short-term sacrifices to achieve long-term benefits, notes Dumanoski, and leaders must strongly advocate for policies that address the many environmental changes to come—despite their unpopularity.

Readers will find the author’s arguments convincing but may worry about the prospect of carrying them out.