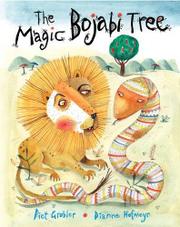 In an animated retelling well-suited to reading aloud, this object lesson in the virtues of concentration features starving animals, a tree that must be named to give up its luscious fruit and a particularly bad-tempered lion.

In a time of drought, one tree offers relief. Told by the giant python guarding fruit “smelling of sweetest mangoes, fat as melons, juicy as pomegranates” that the tree must be addressed by name, Zebra, Monkey and Elephant in turn set out to learn it from distant Lion. So self-congratulatory and distractible are all three, though, that by the time they return, they’ve forgotten it. This leaves small Tortoise to crawl slowly, slowly to Lion and then slowly, carefully back, chanting the tree’s name over and over. Readers and listeners are invited to do the same, though considering the tongue-twisting names in other versions of this African tale, “Bojabi” won’t be that much of a challenge. The story’s narrative pattern is humorously highlighted by the increasingly choleric Lion’s ever-louder responses to the animals’ repeat visits. In eye-catching contrast to the wilted-looking sufferers in Grobler’s fine-lined watercolors, both Python and Tortoise sport bright patterns.

MY DADDY IS A SILLY MONKEY
by Dianne Hofmeyr
Children

THE FARAWAY ISLAND
by Dianne Hofmeyr

THE PLAYGROUNDS OF BABEL
by JonArno Lawson
Children

WHO IS KING?
by Beverley Naidoo
Children