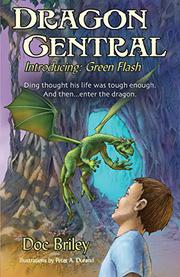 A boy with problems gains a helpful green dragon friend in this debut middle-grade novel.

Narrator Domingo “Ding” Diaz, 11, of South Los Angeles is finding life difficult lately. He wants to stay away from trouble but a gang is pressuring him to join its ranks; he’s been getting into fights; and his schoolwork has suffered. Far worse than any of this, Ding’s mother died and the boy blames himself. Running heedlessly away from a doctor’s appointment, Ding is hit by a bus—and finds himself in a strange world. He’s been saved from annihilation by a small, raspy-voiced dragon called Green Flash, who welcomes Ding to “Dragon Central,” a planet in a parallel universe. But Ding might be stuck there forever unless he can get back to the Gateway Tree, which he ran from against Flash’s advice. Now the tree, Ding’s only ticket home, is being guarded by a dangerous dragon. Also perilous are the cannibalistic humanoid Droods. Ding and Flash journey in search of a way home and meet Dunya, a girl from a tribe of ancient Sumerians. Complications arise when a dragon hatchling mistakenly imprints on Dunya—infuriating the creature’s actual mother. To return home, Ding must use his wits while also working through guilt and grief over his mother’s death. In his book, retired pediatrician Briley uses his background to bring a good deal of sympathy and understanding to Ding’s burdens. The boy very much wants to be cool and tough, but covers it up with bravado: “No one and nothing dings Ding,” he yells—while running away. The pace is a bit slow, and the humor can be heavy-handed, as when Flash can’t explain the phrase “in a nutshell” in a nutshell, or when Ding and Flash exchange needling banter. Dunya begs them to “stop carping at each other,” a sentiment that readers may agree with. Debut illustrator Durand brings characters and settings alive with his well-drafted, black-and-white drawings.

An amusing adventure story with a few flaws but great empathy for kids’ feelings.