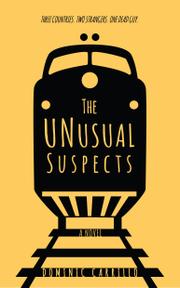 In Carrillo’s (The Improbable Rise of Paco Jones, 2016, etc.) YA novel, a teenager embarks upon a quest for vengeance but later learns important lessons from an unlikely teacher.

Nia, a 14-year-old Bulgarian-American teenager, runs away from her posh home in Sofia, Bulgaria, and boards a train to Berlin. Her mission is to make it to the German capital in time to follow through on a plan to get revenge on her two-timing ex-boyfriend, who’s staying in a hotel in the city. After reading The Count of Monte Cristo, Nia was inspired to brazenly seek out poetic justice of a similar variety in her love life. On the train to Berlin, she meets Kurt Chavez, an 89-year-old retired American schoolteacher who’s traveling to Budapest to execute a darkly romantic plan of his own. When someone attempts to rape Nia on the train, Kurt comes to her rescue, which leads to the pair becoming fugitives and unlikely travel companions. As the two help each other dodge arrest, the significance of their unlikely companionship materializes. Nia, the lonely daughter of wealthy parents going through a nasty divorce, finds mentorship in Kurt, while he, a lonely widower, reconnects to his appetite for adventure through Nia. But this relationship, while sweet, lacks authentic chemistry. Carrillo seems to use the dramatic circumstances of Nia and Kurt’s meeting to simply assume a bond between them instead of cultivating one. Further, Nia and Kurt seem like caricatures of adolescence and old age rather than fully developed characters. Kurt, for example, often provides comic relief with jokes about his age, calling himself an “old fart”; Nia, meanwhile, displays a clichéd understanding of elderly people: “ his old man-isms were hilarious. Who says dadgummit, oh dear, and tarnation?” That said, the pace is fast, and there’s rarely a dull moment; there’s juicy suspense in every subplot and plenty of close calls for the central duo.

An unevenly executed adventure story that celebrates the value of literature and unlikely friendship.

THE OCEAN IN MY EARS
by Meagan Macvie
Children