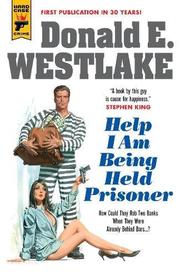 HELP I AM BEING HELD PRISONER

Westlake, nine years dead but still enjoying a very productive season (Forever and a Death, 2017), returns in a bright reprint from 1974 that shows him working the field in which he remains unrivaled: the comic caper in which Murphy’s law reigns supreme.

A practical joke gone wrong got Harold Künt five to 15 years in upstate New York’s Stonevelt Penitentiary. Even though he can’t control his compulsion to play jokes on everyone he can reach, Harry also wants to keep his head down, do his time, and return to society. Not happening. He stumbles on a group of seven cons who’ve commandeered an undiscovered tunnel, not to break out of the prison, but to leave one or two at a clip on self-appointed thefts and furloughs and return before they’re discovered. It’s nice to be back in the outside world, especially among oblivious citizens who call Harry “Harry Kent.” But it’s not so nice to hear that Phil Giffin, Joe Wheeler, Max Nolan, and the rest of the gang plan to break out just long enough to rob not one, but two banks, Fiduciary Federal Trust and Western National, taking advantage of the fact that they all have the ultimate alibi. The thought of pulling off a robbery gives Harry the willies; every single way he can imagine the plot ending looks disastrous. Nor can he pull out of the heist his fellow prisoners have generously allowed him to buy into without arousing their suspicions. Worst of all, Harry’s reputation has convinced Warden Eustace B. Gadmore that he’s the one who keeps working signs announcing “HELP I AM BEING HELD PRISONER” into preposterously unlikely settings, and it’s only a matter of time before the warden lowers the boom.

Instead of sharing the hero’s fears, fans of Westlake’s Dortmunder series, which got started around the same time with The Hot Rock (1970), will appreciate the author’s consummate blending of comedy and suspense, often within the same sentence, and rejoice that more Westlakes are slated for resurrection.

FOREVER AND A DEATH
by Donald E. Westlake
Nonfiction

THE CHASE
by Janet Evanovich
Mystery

THE MURDER OF MY AUNT
by Richard Hull
Mystery