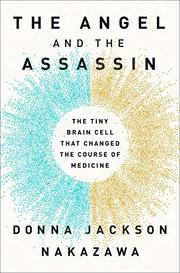 THE ANGEL AND THE ASSASSIN

How the brain’s microglial cells affect the body and the mind.

From 2001 to 2006, science journalist Jackson Nakazawa (Childhood Disrupted: How Your Biography Becomes Your Biology and How You Can Heal, 2015, etc.) was stricken, for the second time, with Guillain-Barré syndrome, an autoimmune disease that attacks nerves, causing paralysis. As she recovered, she experienced cognitive and psychological changes that urged her to question the connection between physical immune dysfunction and brain-related and psychiatric illness, a connection that went against the prevailing medical belief that the brain could not be affected by immune disorders. The author’s investigations led her to the work of scientists across many disciplines—neurobiology, genetics, psychology, psychiatry, medicine, and immunology—several of whom she profiles in lively detail: the caffeine-fueled Beth Stevens, for one, a MacArthur fellow who directs a laboratory, and Jonathan Kipnis, whose graduate school professors, decades ago, did not encourage his experiments in the immune system–brain connection. Translating scientific research into brisk, readable prose, Jackson Nakazawa reports on breakthrough discoveries regarding microglial cells, which function as the brain’s white blood cells, with “enormous power to protect, repair, and repopulate the brain’s billions of neurons and trillions of synapses, or to cripple and destroy them.” But besides functioning as helpful “angels,” they also can spin into overdrive in response to stressors such as infection, environmental toxins, trauma, physical or emotional abuse, and chronic mental stress. When these stressors appear to microglia as if they are biological pathogens, the resulting “frenzied” microglial activity can lead to depression, anxiety, cognitive impairment, forgetfulness, lethargy, and similar symptoms. The author follows three autoimmune sufferers whose psychological symptoms were significantly improved by one of the new therapies resulting from microglial research: transcranial magnetic stimulation, neurofeedback, gamma light therapy, and fasting diets. Scientists in many fields, writes the author, are looking into a microglial connection to Alzheimer’s disease, with the hope that if the cells can be rebooted and reprogrammed, they can “help reverse the ravages” of the disease.

A fascinating look at cutting-edge research with profound implications.