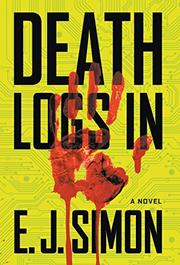 It’s been less than a year since Alex, brother to Gibraltar Financial chairman Michael, was murdered and subsequently, in a manner of speaking, resurrected—as an artificial intelligence designed in Alex’s image. Michael manages Alex’s sports-gambling and loan-sharking business, Tartarus, with ease, but the associated criminal element remains: Sharkey, who ordered Alex’s murder, is hiding in Italy with help from people in the Vatican. Vatican officials send a bishop to stir up trouble at Gibraltar—announced as a new board member to accommodate a merger (a thinly disguised takeover)—and a hit man, Frank Cortese, to off Michael. Michael needs the resourceful Alex-AI more than ever, as even Sindy Steele, his newly hired bodyguard and amour, is more lethal than he initially perceived. The novel teems with subplots, involving John Rizzo, a former cop, whom Michael humiliates after Rizzo tries to cheat the gambling end of Tartarus, and a photographer, who learns the hard way that Frank doesn’t like having his picture taken. But Simon expertly manages these various storylines, and they help maintain an impressive pace that’s speedier than the author’s previous outing. Michael is generally a believable protagonist; however, he isn’t even part of the story for much of the Gibraltar situation, which includes Hans, a Swiss banker (and Nazi descendant), who arrives in NYC to helm some of the company’s shady goings-on. Simon keeps the technological aspect basic: The novel offers no specifics on Michael’s investment in the AI’s recent upgrade or its expansive cyberaccess. It is perplexing, however, that no character seems to grasp the simple and well-known concept of artificial intelligence; Michael himself talks to the Alex-AI almost as if it were his brother’s ghost, naïvely asking it, “What’s it like to be dead?”

An action-laden plot and another open ending will have the series collecting many more fans.

THE FOOTPRINTS OF GOD
by Greg Iles
Fiction

THE ARRAIGNMENT
by Steve Martini
Fiction