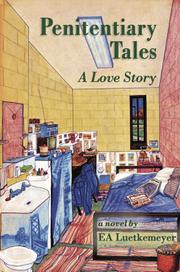 A Love Story
by EA Luetkemeyer
GET WEEKLY BOOK RECOMMENDATIONS:

This collection of linked short stories examines life from the perspective of a white drug dealer serving time in a state penitentiary.

Danté Allegro is a family man who lives with his wife, Lucy, and young daughter, Lola, in a cottage in the upscale community of Sausalito, California. The opening tale describes the couple preparing to meet with Danté’s father-in-law, Wally, a man in the midst of a “three-quarter life crisis,” with the intention of making a shocking revelation. After an evening of fine dining, Danté admits that his real name is Dean Davis and that he has been using an alias while selling marijuana up and down the West Coast. He also discloses that he is about to “surrender to a County Sheriff in Southern Illinois” and serve five years “with good time” in prison. The stories that follow chart Dean’s move from county jail to the state penitentiary, and explore many aspects of incarceration, with an emphasis on the eccentricities of other inmates, such as Wilbur, “who wrote bizarre stories he claimed were channeled through him by denizens of another dimension.” Luetkemeyer’s (Inside the Mind of Martin Mueller, 2018, etc.) tales are cleverly laced with literary references. A cellmate in county with a “long-suffering, sorrowful face” is called “Oh Henry” (although he admits this is on account of the candy bar rather than for the American author). A story about a work detail is titled “Slaughter House Jive,” a nod to Kurt Vonnegut. These subtleties aside, Luetkemeyer’s approach to storytelling is unflinchingly abrasive when capturing the realities of prison. One African American inmate declares: “Y’all better pucker up them butt-holes real tight cause some crazy-ass” black man “doin life gone tear off that booty in a minute!” The author is determined to examine racial and gender tensions in correctional facilities. But while some readers will appreciate the testosterone-fueled language of the prison yard, others will argue that the collection perpetuates stereotypes: “A gaggle of Gumps—gender-challenged inmates with bleached hair…sunned themselves in tailored denim short shorts.” Despite, Luetkemeyer’s self-assured visceral approach, the plot breaks little new ground in terms of revealing anything fresh about prison life.