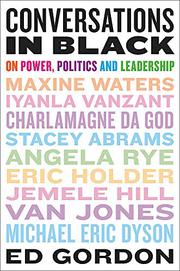 A chorus of frank opinions personalize race and racism “across black America.”

Since the project began in 2012, the year Trayvon Martin was killed, acclaimed journalist Gordon has been assembling virtual conversations with black influencers on the condition of—and the issues facing—the nation’s black population. In each Q&A, the respondent, reflective of their unique communities, reacts to and answers queries about such topics as intracommunity violence, educational advancement, and how proactive attitudes and active engagement can bring about positive societal changes. The state of progress in black America is well articulated through the sentiments of activists and educators like Ericka Huggins, who insists the climate could shift if the “institutions and structures” changed in a nonmonolithic way, including within economic and political arenas. In one panel, which includes notable political figures and social activists like Stacey Abrams and Michael Steele, the contributors discuss the downslide of black equality amid a “drastically changed political landscape” of the Trump era and compare current conditions with that of the Obama administration, which had its own mixture of accomplishments and shortcomings. The narrative also looks at black leadership and how its efficacy can be evaluated and encouraged through outlets like social media and community outreach. Gordon wisely includes a diverse array of panelists within each discussion. These include comedians, TV producers, ministers, rappers, and academics as well as Harry Belafonte and 15-term congresswoman Maxine Waters. Their informed discussions offer both invaluable perspectives and solid motivation to counter the waves of racial injustice. Closing each chapter is a section of pertinent questions meant to inspire dialogue and create change on any level. Though the conversations are vibrant and empowering, the collective impression from the participants distressingly points to the fact that “the playing field for most Africans has not changed.” Other notable contributors include Jemele Hill, DeRay Mckesson, Michael Eric Dyson, Van Jones, Eric Holder, and Iyanla Vanzant.

Refreshing, illuminating contributions sure to spark lively and hopefully constructive discussion and debate.