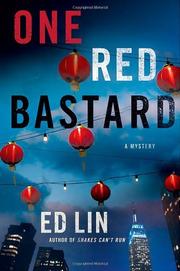 As Taiwan and Beijing jockey for position in the diplomatic game that will determine which of them the U.S. will recognize as the real China, word comes that the late Mao Tse-tung’s daughter Li Na is seeking asylum in America. It seems like a plum when Robert’s girlfriend Lonnie, a Newswire reporter, snags an interview with Chen Xiaochuan, Li’s representative, but everything goes haywire when Chen is found bashed to death in Roosevelt Park, his finger severed, soon afterward. Miraculously, the cops don’t arrest Lonnie, even though she was the last person to see Chen alive. But clouds of suspicion form around her, her own news organization stops running her stories and Robert, who’s already under official pressure to clear the case, finds himself even more motivated. His rounds take him not only to representatives of both regimes but among such sharply differentiated figures as agitator Lincoln Chen, aka “Mr. Revolution”; “anti-Chinese Chinaman” Byron Su; and Artie Yee, who seems curiously unconcerned that someone’s torched the offices of Inside Chinatown before it could cover the big story.

The mystery is both confusing and obvious, but Lin (Snakes Can’t Run, 2010, etc.) has a rewardingly sharp eye for both the issues that divide the denizens of New York’s Chinatown and the features that bind them together, as Robert continues to be bound to his ex-girlfriend Barbara, in spite of it all.

THE MAN WHO RODE THE TIGER
by Charles Sailor
Fiction