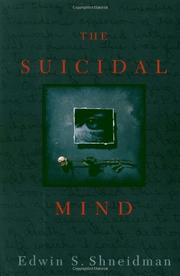  Three case studies from the files of a UCLA thanatologist demonstrate in chilling detail that killing oneself is no easy matter. Shneidman, who limits his comments to cultures with a Judeo- Christian tradition, proposes the not especially novel idea that psychological pain, or ``psychache,'' is the primary cause of suicide. Using a form adapted from Henry A. Murray's Explorations in Personality to rate the psychological needs of individuals, he concludes that most suicides fall into five need clusters. (There is at this point a gratuitous insertion of so-called experts' assessments of the needs of Hitler, Martha Graham, Marilyn Monroe, Captain Ahab, and others.) His case studies demonstrate three of these clusters: the need to be loved, the need to strike first, and the need to belong. The first case study consists mostly of transcribed audiotapes from Ariel (pseudonyms are used throughtout), who chose self-immolation but survived with horrible burns over most of her body. Beatrice, the second case, wrote out her life story while she was Shneidman's patient; her choice was knives and starvation, and it is unclear whether her attempts at suicide have ceased. Castro, the third case, was unable to speak to Shneidman, having blown away most of his face while trying to blow his brains out, but he wrote out for him a long account of the episode, as well as many notes and letters. Shneidman sums up with a list of ten psychological commonalities of suicide--the common emotion is hopelessness/helplessness, the common action is escape, etc.--and a list of 24 psychotherapeutic maneuvers that he deems appropriate in treating potential suicides. Though providing few fresh insights, this succeeds on another level: By revealing the possible ghastly consequences of failed attempts, perhaps it may help deter some from trying to take their own lives. (4 photos, 1 linecut, not seen)

THE MYTH OF MARTYRDOM
by Adam Lankford
Nonfiction