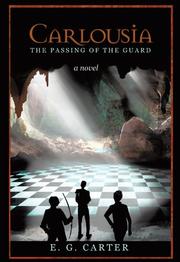 The Passing of the Guard
by E.G. Carter
BUY NOW FROM
AMAZON
BARNES & NOBLE
LOCAL BOOKSELLER
GET WEEKLY BOOK RECOMMENDATIONS:

Three young boys discover the doorway to an enchanted land through a mystical portal in their tree house in Carter’s debut novel.

As the book opens, Eddie Caskitt faces a great deal of adjustments in his life. He has just moved to a new town and is learning to make friends when his parents tell him that his beloved grandfather, Adam, is dying. On his deathbed, Adam reveals to Eddie the location of a magical bracelet that will allow him to travel to Carlousia, a wondrous world that Adam himself had been visiting for many years. Although Eddie had never fully believed his grandfather’s wild tales, he soon finds his way into Carlousia, as well, and learns that it is his destiny, like Adam before him, to be a Guardian and protect the land from the villains that threaten to undermine its freedom and peace. Although the book has many elements in common with countless works of children’s literature before it, Carter has an extremely imaginative mind and fills his novel with numerous, distinctive creations, from Wahhaha, a fuzzy, little, mischievous but loyal creature who bounces around like an over-stimulated Disney character; to the Solphins, a large, underground worm that Carlousians ride like a wave for travel and also utilize for mail delivery. Carter’s world-building can be a bit convoluted (the rules for travel in and out of Carlousia are dizzying), his prose falters at times and, as is the case with many fantasy novels, his story can be accused of being too male-centric, yet Carlousia has an enormous amount of heart. The relationship between Eddie and his friends, Scotty and Dan, is lovingly drawn and the quest they embark upon is exciting and suspenseful.

While the novel may lack the sophistication to appeal to older generations, Carter has crafted a richly detailed world that young readers will love to spend time exploring, with protagonists worth rooting for.