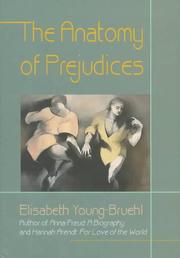 THE ANATOMY OF PREJUDICES

 Perceptive but unnecessarily dense and turgid psycho- sociological examination of the intricacies of prejudice. Like intelligence, prejudice is often misunderstood to be a largely undifferentiated trait: All its guises, whether anti- Semitism, sexism, or homophobia, are seen as only minor variations on the same theme. But as biographer/psychotherapist Young-Bruehl (Creative Characters, 1991; Anna Freud, 1988; etc.) convincingly argues, each of these ``ideologies of desire'' can have a variety of significantly different psychological origins. Drawing heavily on Freud's theories on neurosis, she categorizes prejudices as either obsessional, hysterical, or narcissistic. Homophobia, then, may stem from narcissistic roots, or it may be hysterical; thus, psychological underpinnings become the true basis for any similarities between prejudices. While this approach may work on an individual level, it runs into some difficulties when applied to large groups. Despite some clever wiggles and waggles, Young-Bruehl comes perilously close to putting whole nations on the psychiatrist's couch. While her evidence throughout is admittedly unscientific, it certainly is massively deployed. Her erudition is particularly impressive as she ranges across almost everything written about prejudice in the last two centuries, from Hannah Arendt's meditations on the banality of evil to Malcolm X`s evolving conception of racism to the pernicious tsarist forgery, The Protocols of the Elders of Zion. In fact, her meandering from digression to extended aside is a little like driving down an interstate and pulling off at every exit. The only things she leaves out are the latest scientific (namely ethno-biological and socio-biological) findings. Unpleasant as it is, prejudice has its evolutionary reasons, and it seems disingenuous to try and fob it off as mere neurosis. Trimmed of its fat and obfuscations, there is a lean and challenging book here, but Young-Bruehl has so buried her argument that few readers will have the time or stamina to persevere in the necessary excavations.