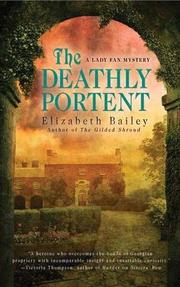 The village blacksmith succumbs to a roof cave-in.

Ottilia and her new husband Sir Francis Fanshawe are returning to their estate from a visit to her aging, deaf and snapping mentor when their carriage wheels become mired in mud and the axle breaks. While Tillie picks wildflowers and Fan cusses their plight, his man Ryde heads for the nearest village to get help. On his return, he tells them that the poor blacksmith Duggleby died the night before, squashed under a falling roof, then finished off by a fire. The locals, he adds, have blamed his death on Cassie Dale—a spawn of the devil, they maintain, who foresaw the smith’s demise through her second sight. They took after her and her maid, pounding them with stones. The women barely managed to reach the vicarage, where the newly appointed Rev. Aiden Kinnerton sheltered them. Second sight? A suspicious death? Tillie’s snooping instincts are aroused, and she cajoles Fan into getting them to Witherley so that she can begin some decorous prying. Before the lid is nailed shut on Duggleby’s coffin, Tillie has learned that someone whacked him fiercely on the head, that a pair of chambermaids are warring over marriage prospects and that another maid has gone missing. There’ll be more death and hints about secret riches; the Rev. Kinnerton will continue having nightmares about his service in Africa; and the drinkers at the pub will continue accusing Mrs. Dale of witchcraft. But Tillie and her beloved Fan will sort through all these imbroglios to the truth, then, exhausted, head for home.

Like The Gilded Shroud (2011, etc.), a fulsome simulacrum of the Regency era, with just enough upstairs/downstairs brouhaha to entertain fans of Downton Abbey.

THE GILDED SHROUD
by Elizabeth Bailey

THE RIDDLE OF ALABASTER ROYAL
by Patricia Veryan
Fiction

MAGGIE BY THE BOOK
by Kasey Michaels
Newsletter sign-up