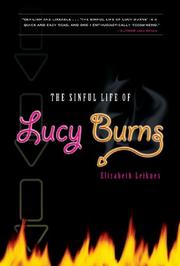 THE SINFUL LIFE OF LUCY BURNS

Fetching young woman who inadvertently made a deal with the devil schemes to find a way out of it.

No doubt, being Satan’s handmaiden has its upside. There is eternal youth, beauty and the ability to eat all the ice cream you want without gaining weight, but for Lucy Burns, sending wicked souls to eternal damnation has gotten to be a real bummer. As a “facilitator” for the Prince of Darkness, or “GM,” Lucy also has to live above a porthole to hell in Reno, Nev. And not only does her “work” prevent her from contacting her family, but every time she has sex with a guy she likes, she ends up vomiting afterwards. It was not always so. When she was 11, her virtuous older sister Ellen was in a bad car accident, prompting Lucy to strike a bargain with the powers-that-be in order to save her. She connected with the wrong power, and 20 years later she discovers, through an encounter with a former facilitator who got out, that it is possible to quit, although the requirements are steep. They involve procuring 54 evil souls; finding a willing replacement for her position; and taking out a specified “target.” And failure is not really an option. With a little ingenuity—paying a visit to a prison death row and organizing a KKK meet up—Lucy does make headway on the first one, but it is when the identity of her “target” is revealed that she really faces a challenge. Romance, too, makes an appearance in the form of Luke, the hunky, and blind, literature professor she meets who is exactly the kind of man she could fall for. But could he handle the real her? Goofy and breezy, this debut has a pleasingly flawed heroine and feels like it was as much fun to write as it is to read.